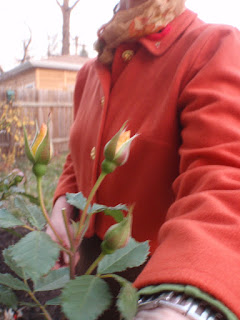 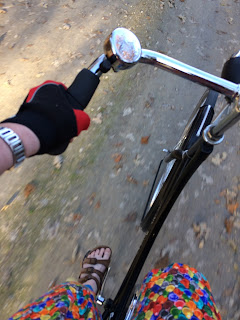 Our best wishes to you all for this holiday season and a safe, healthy, and contented New Year. 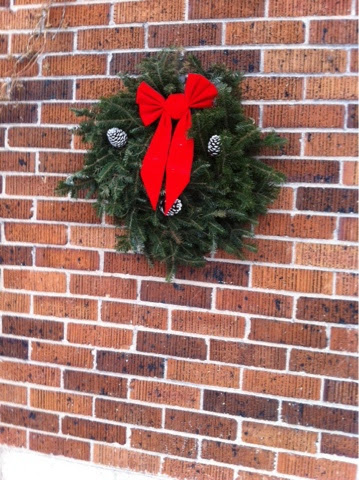 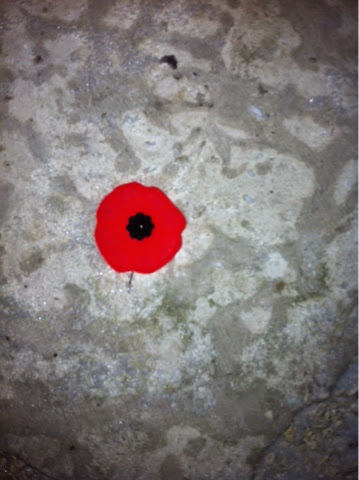 A few weeks ago the Geek and I went on a fruitless mission to the MCC to find a blender.  We found this bike instead.
It is made by the German company, Adler, and at best estimate, is from the 1940's. It contains all original parts except the handgrips (which I will be replacing as they are a rather soft foam and do not absorb shocks at all) and the tires. We have since replaced the skirtguard as it was rather ragged and not up to the task.
I will let you read/translate this link for more information and simply leave you with the eye-candy. 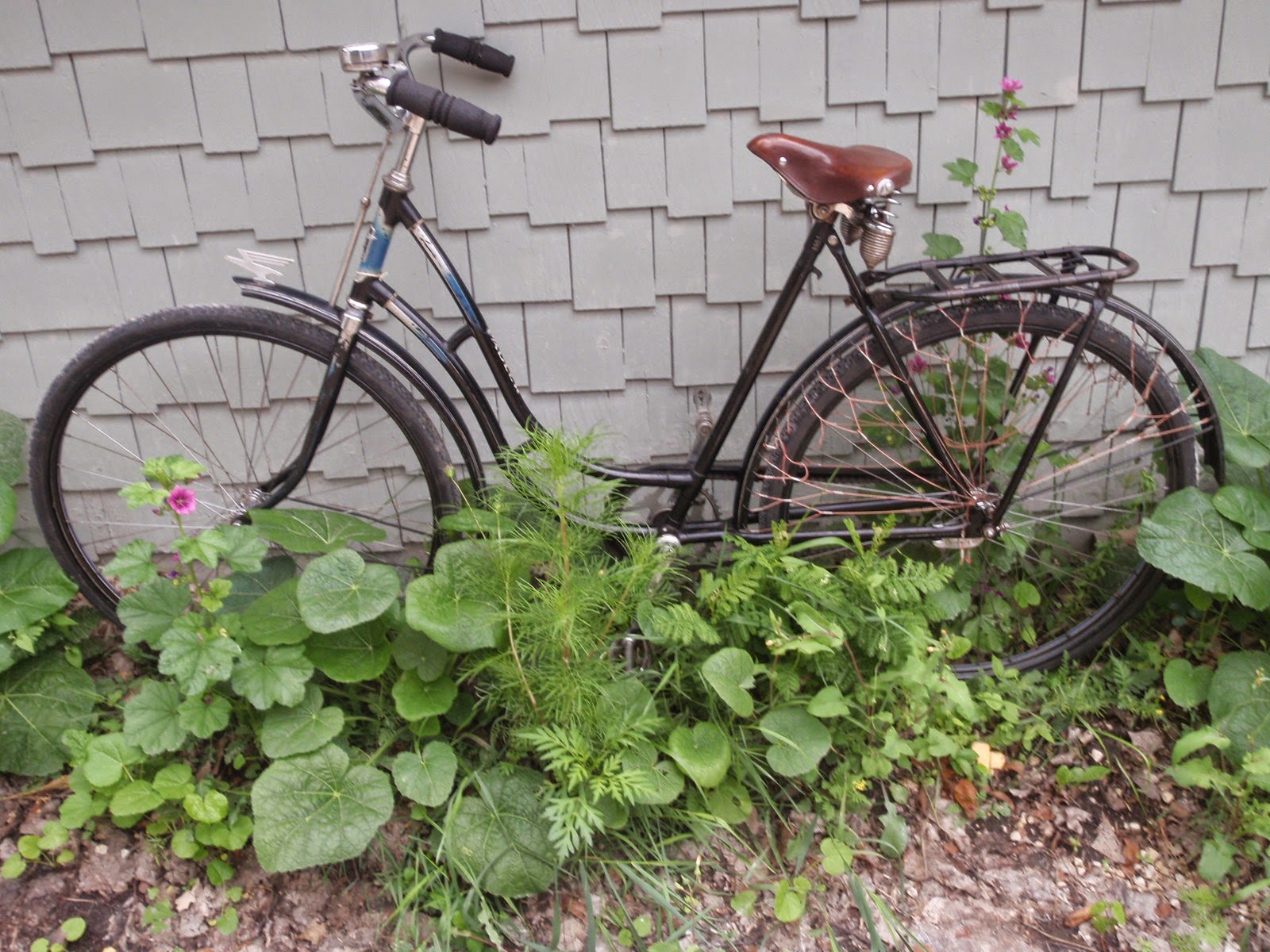 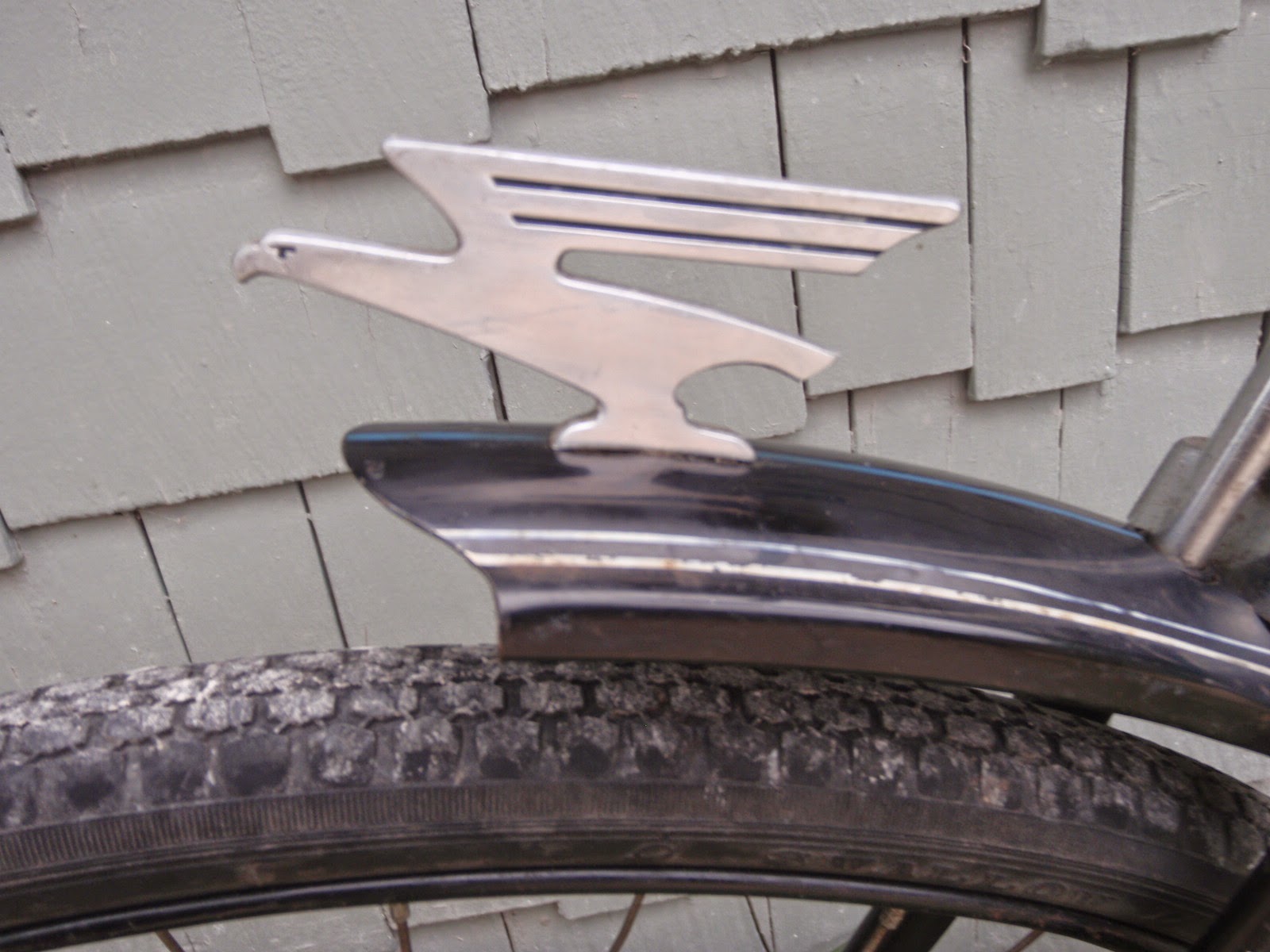 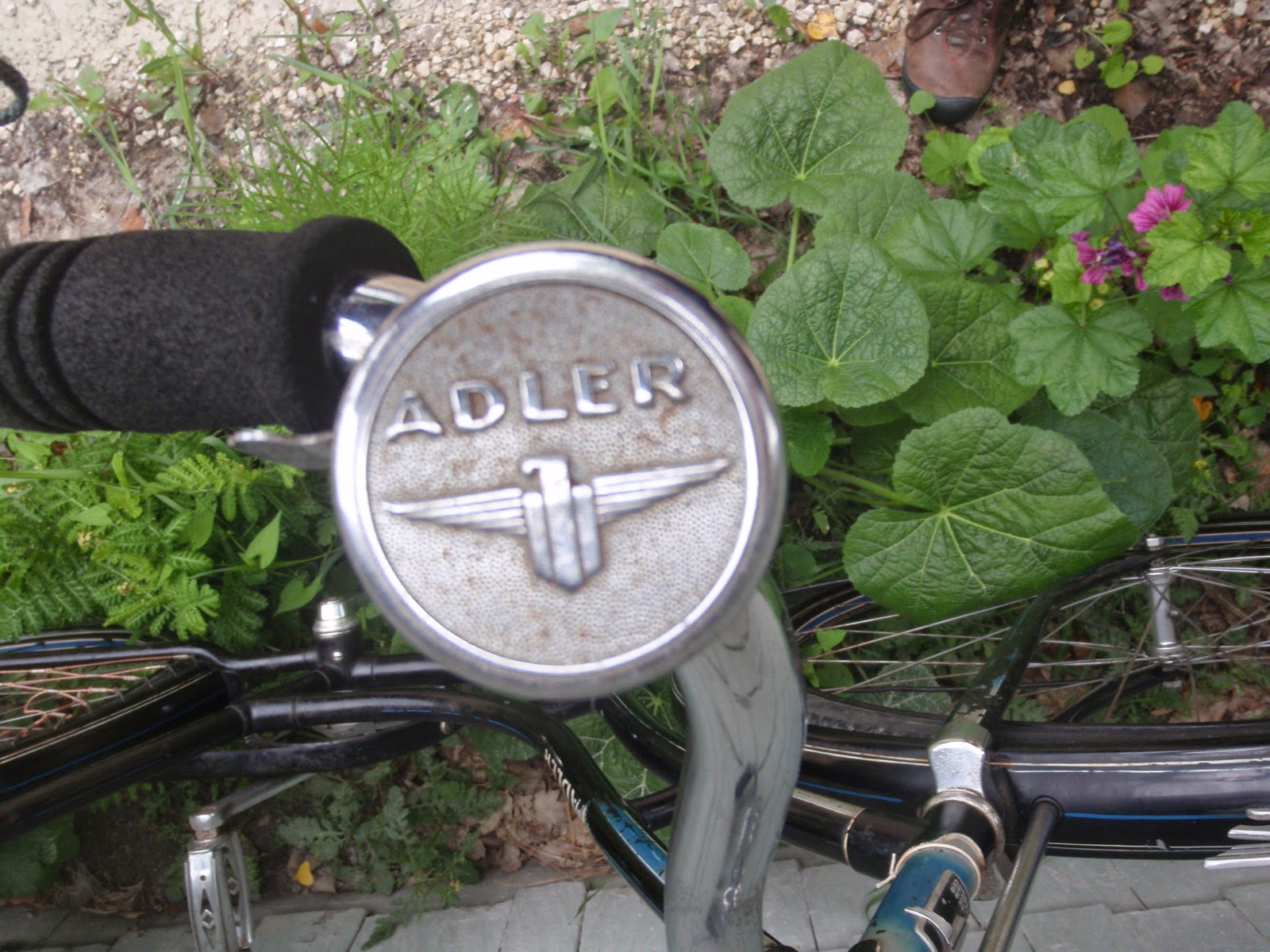 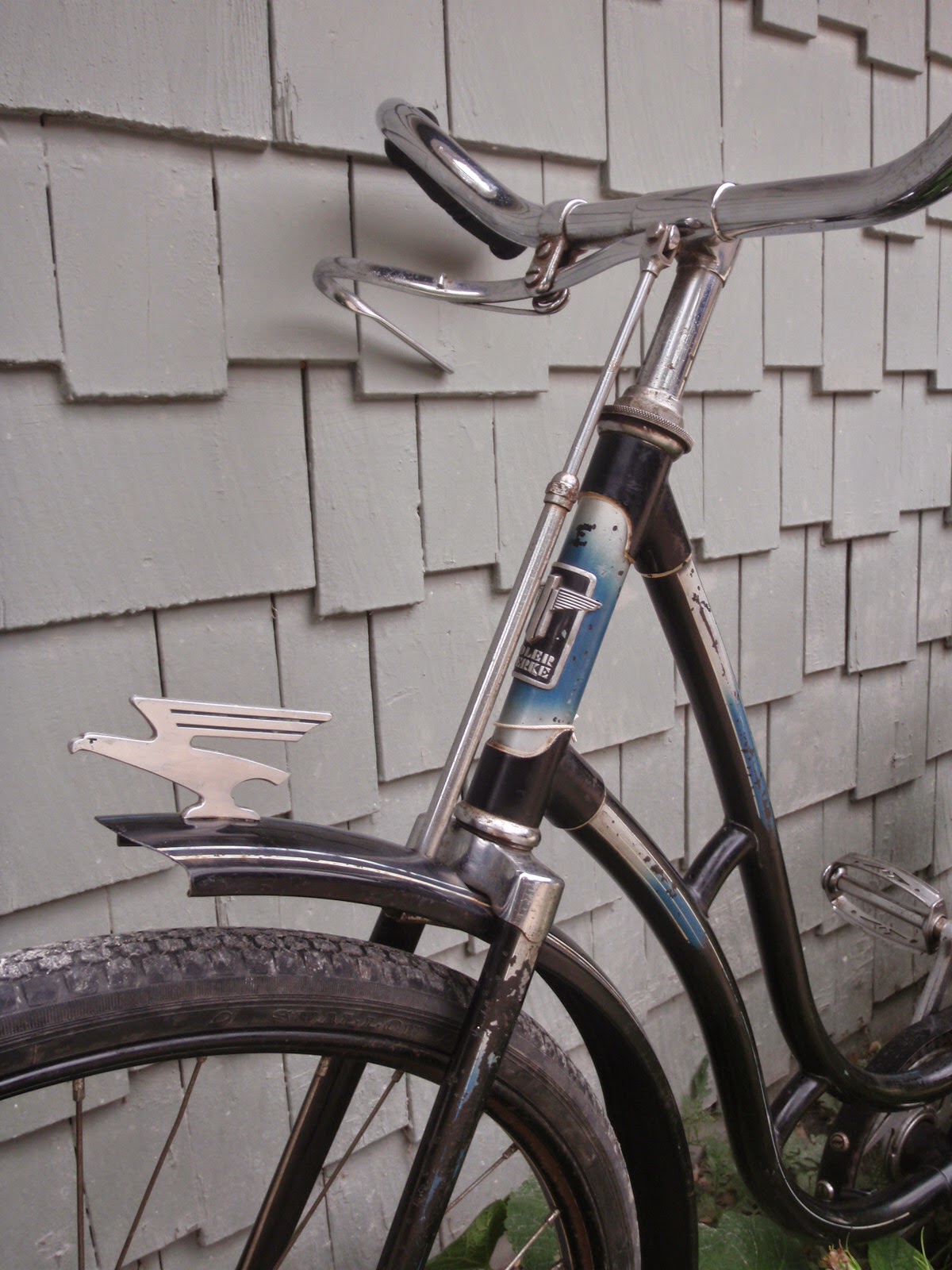 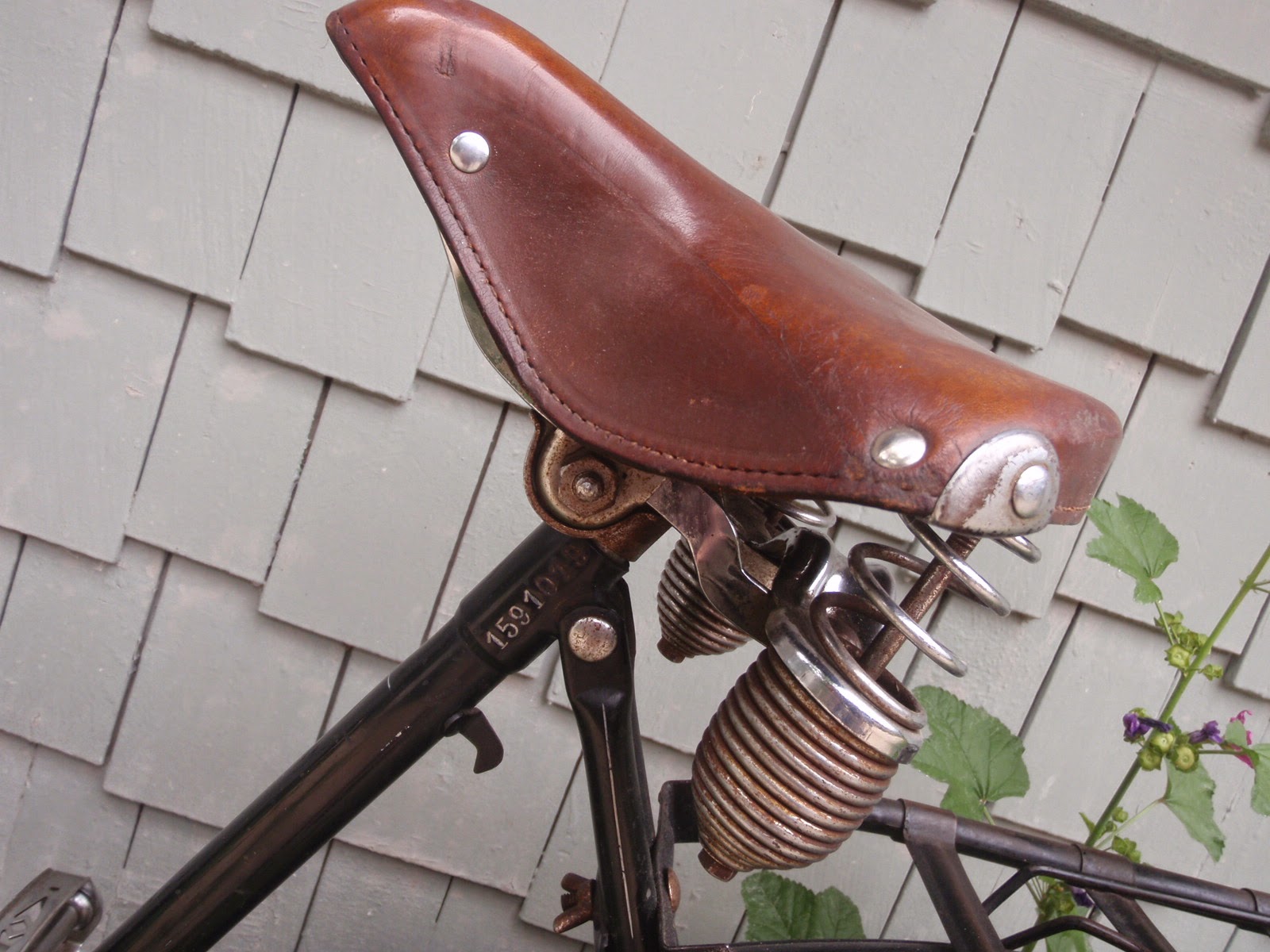 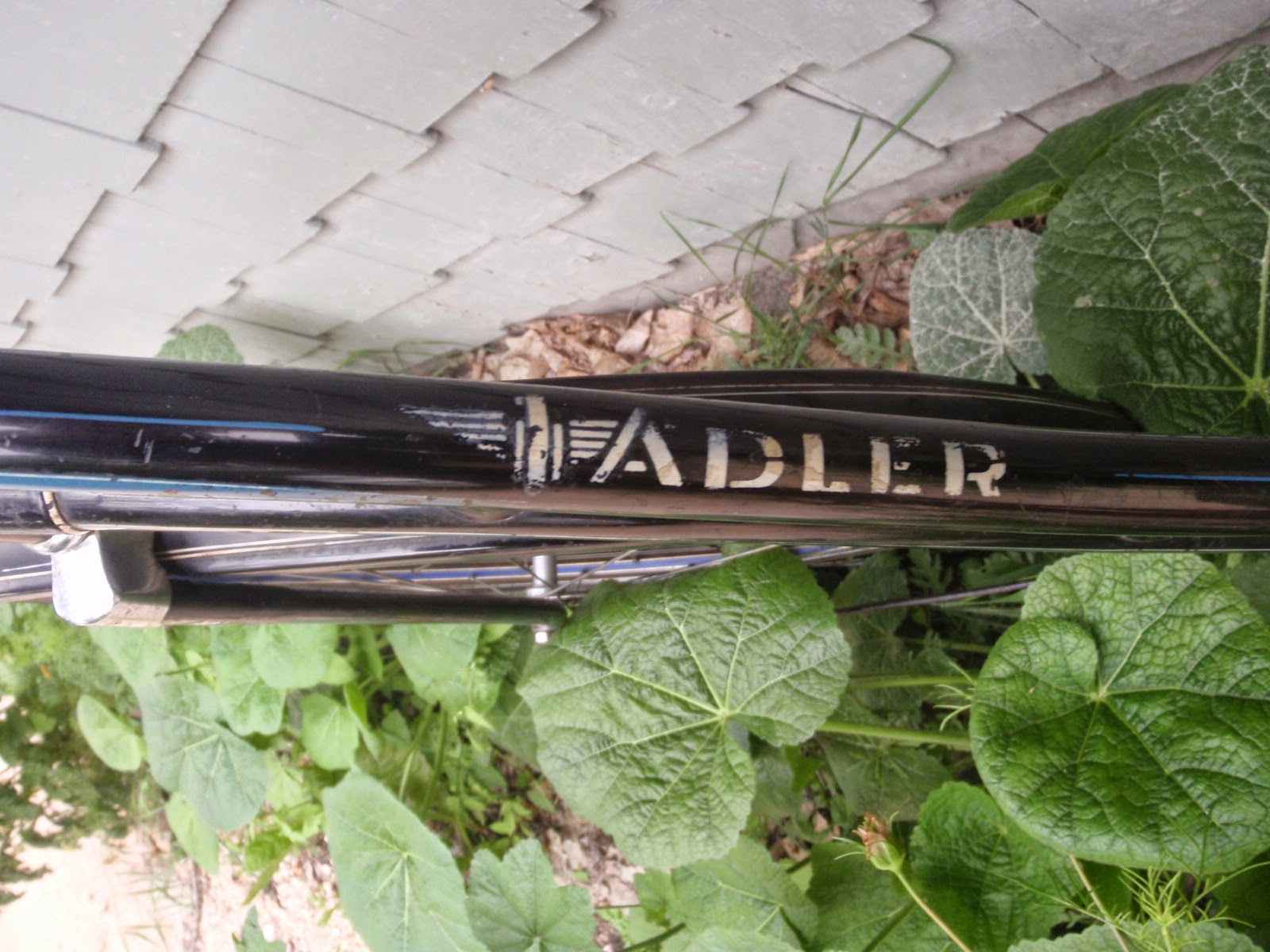 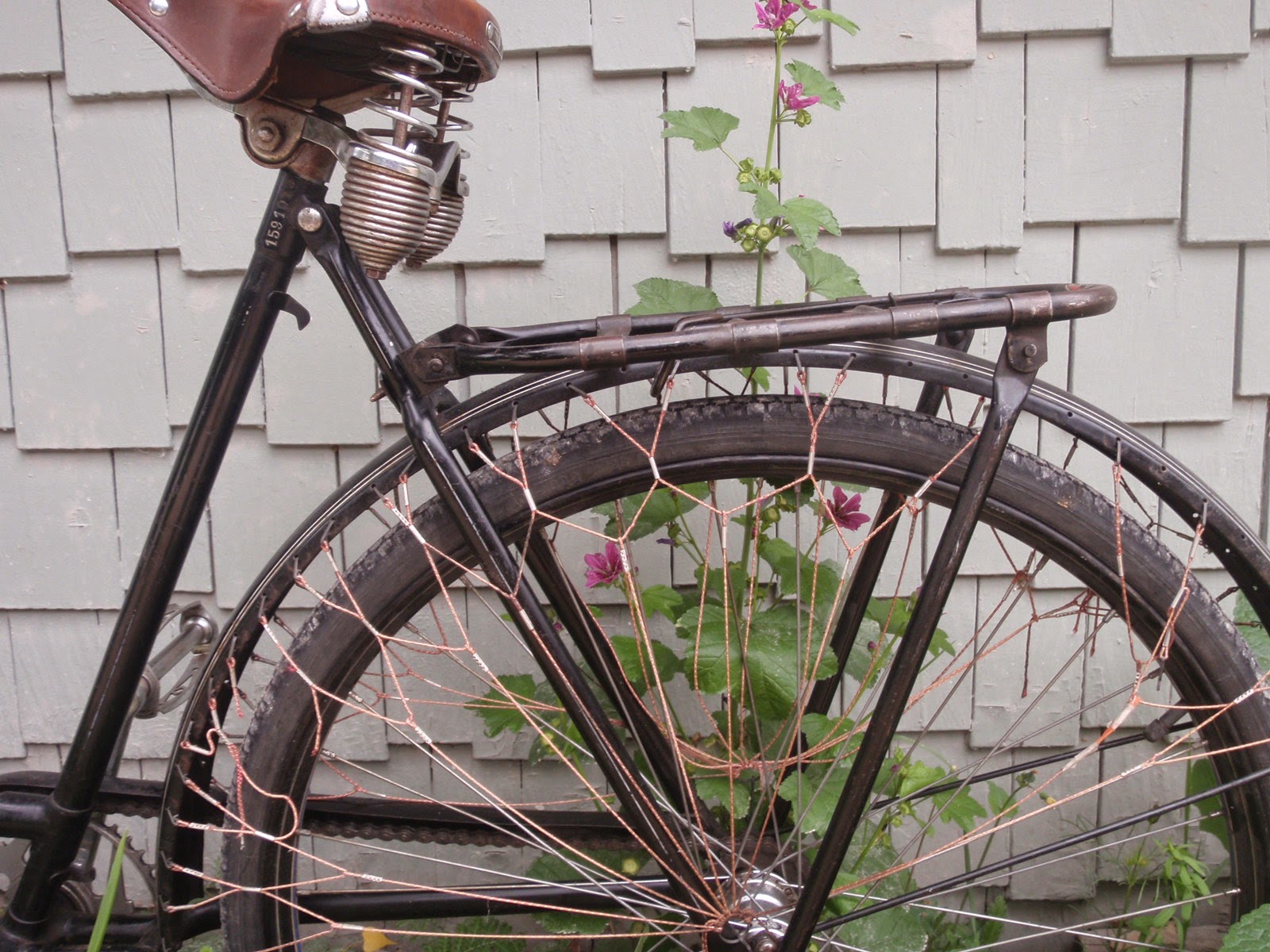 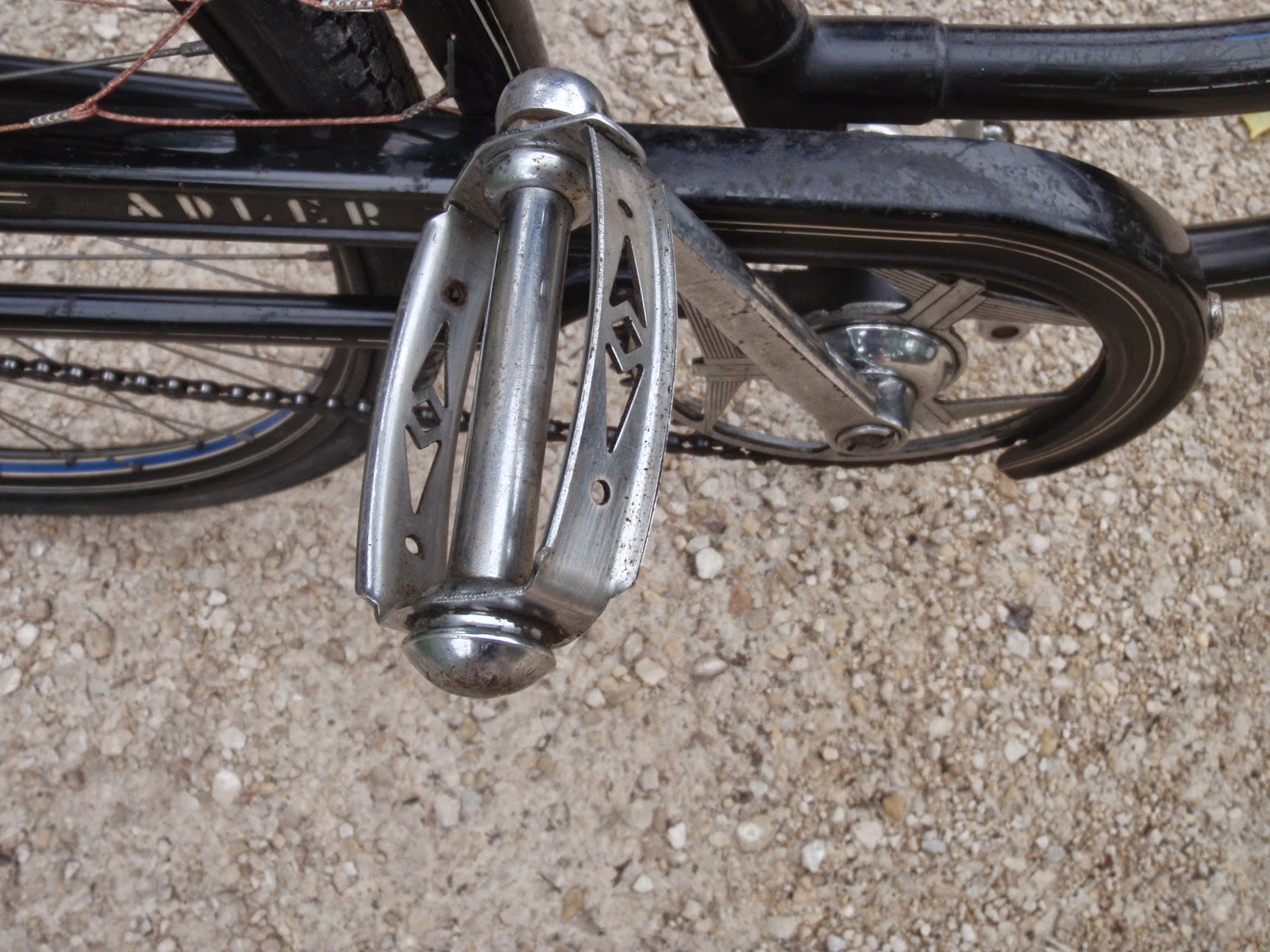 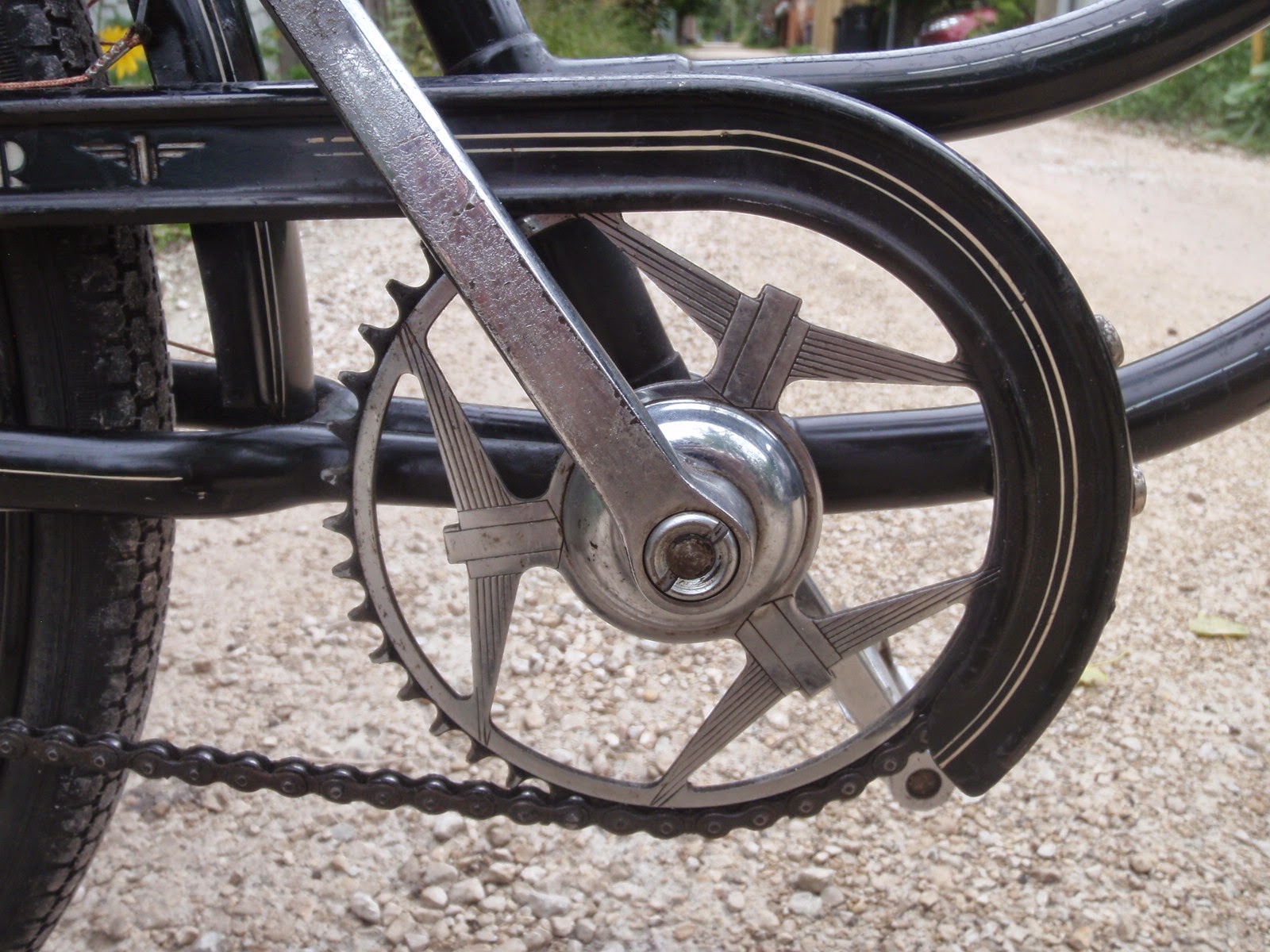 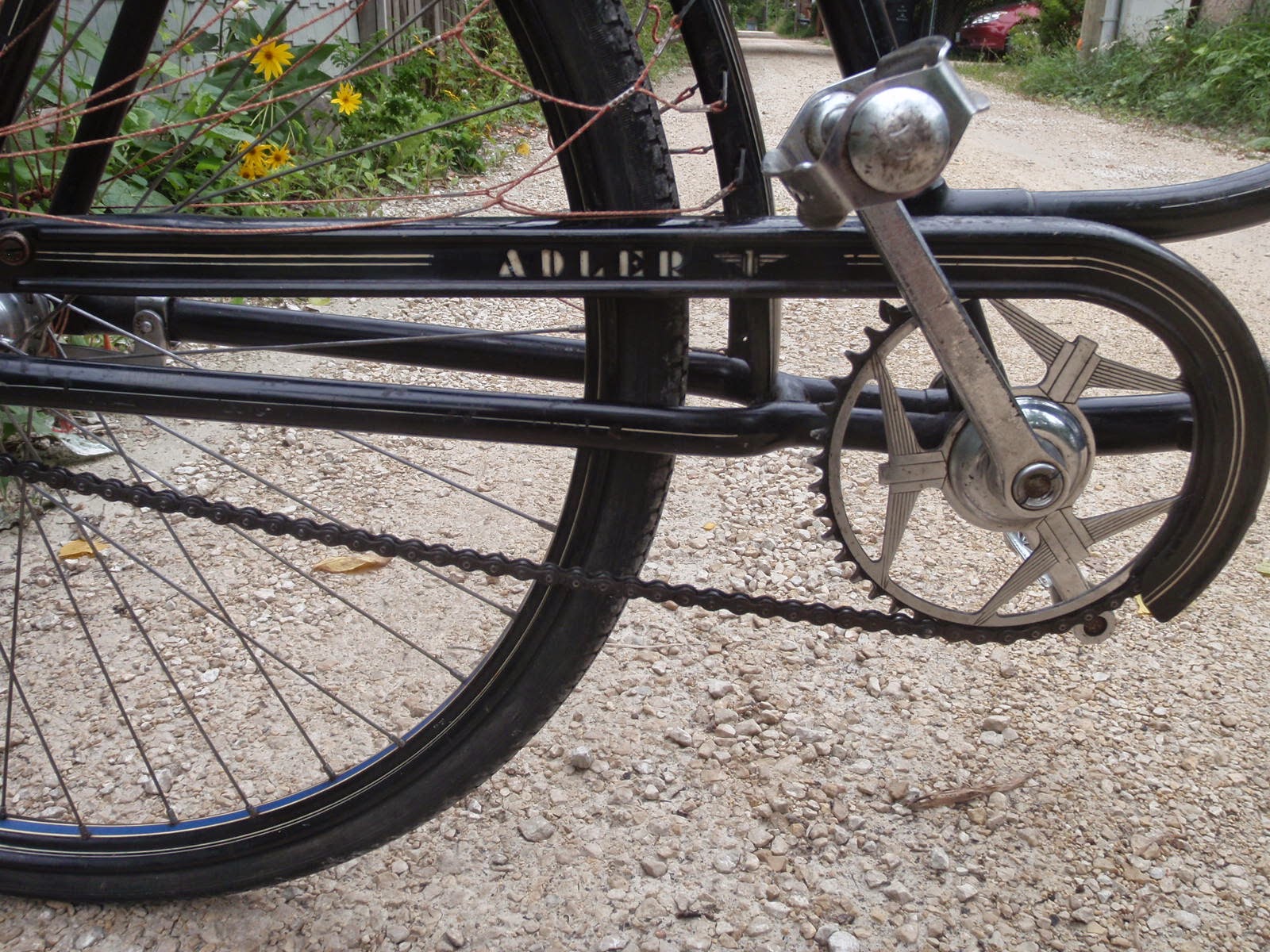 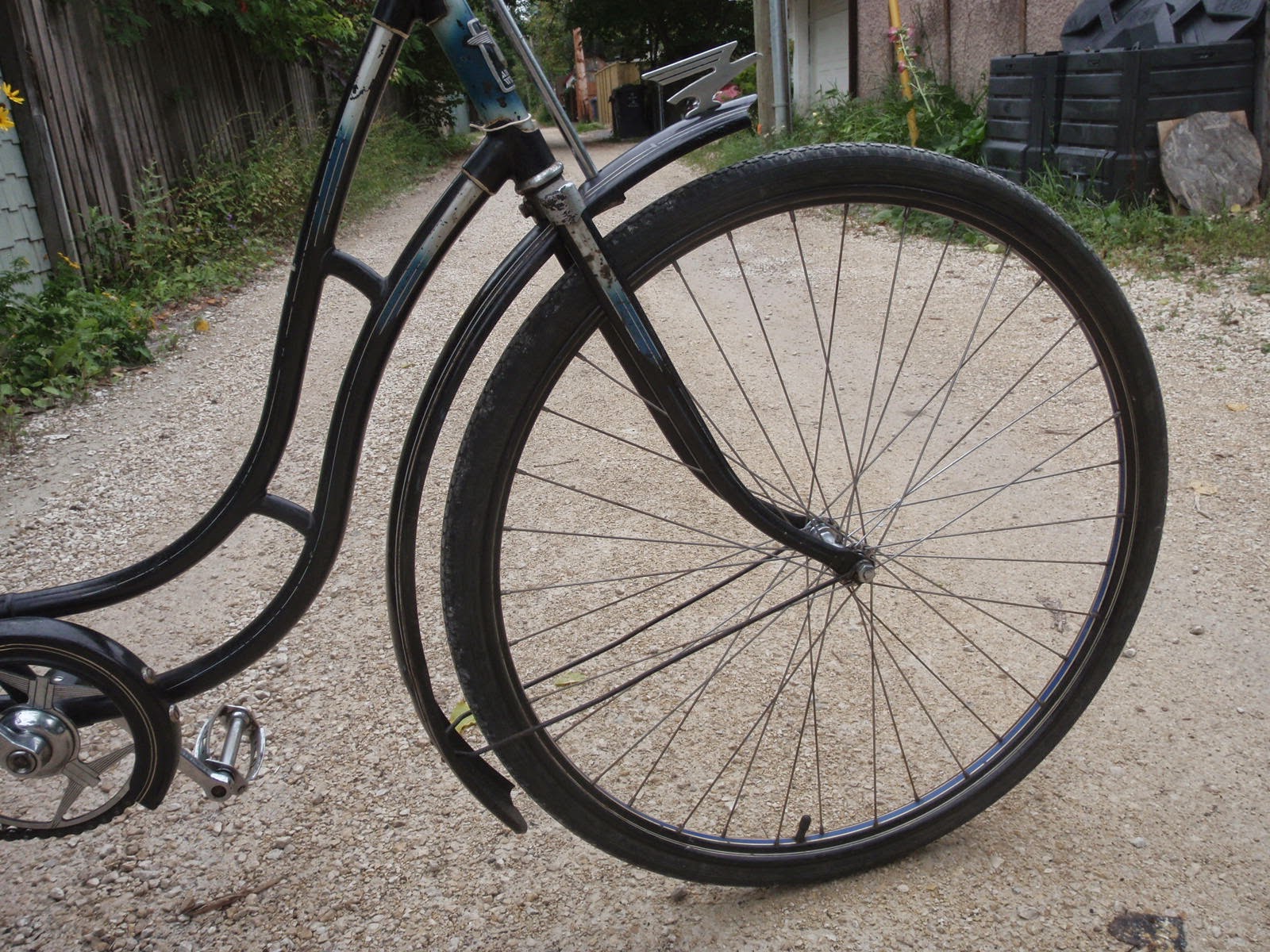 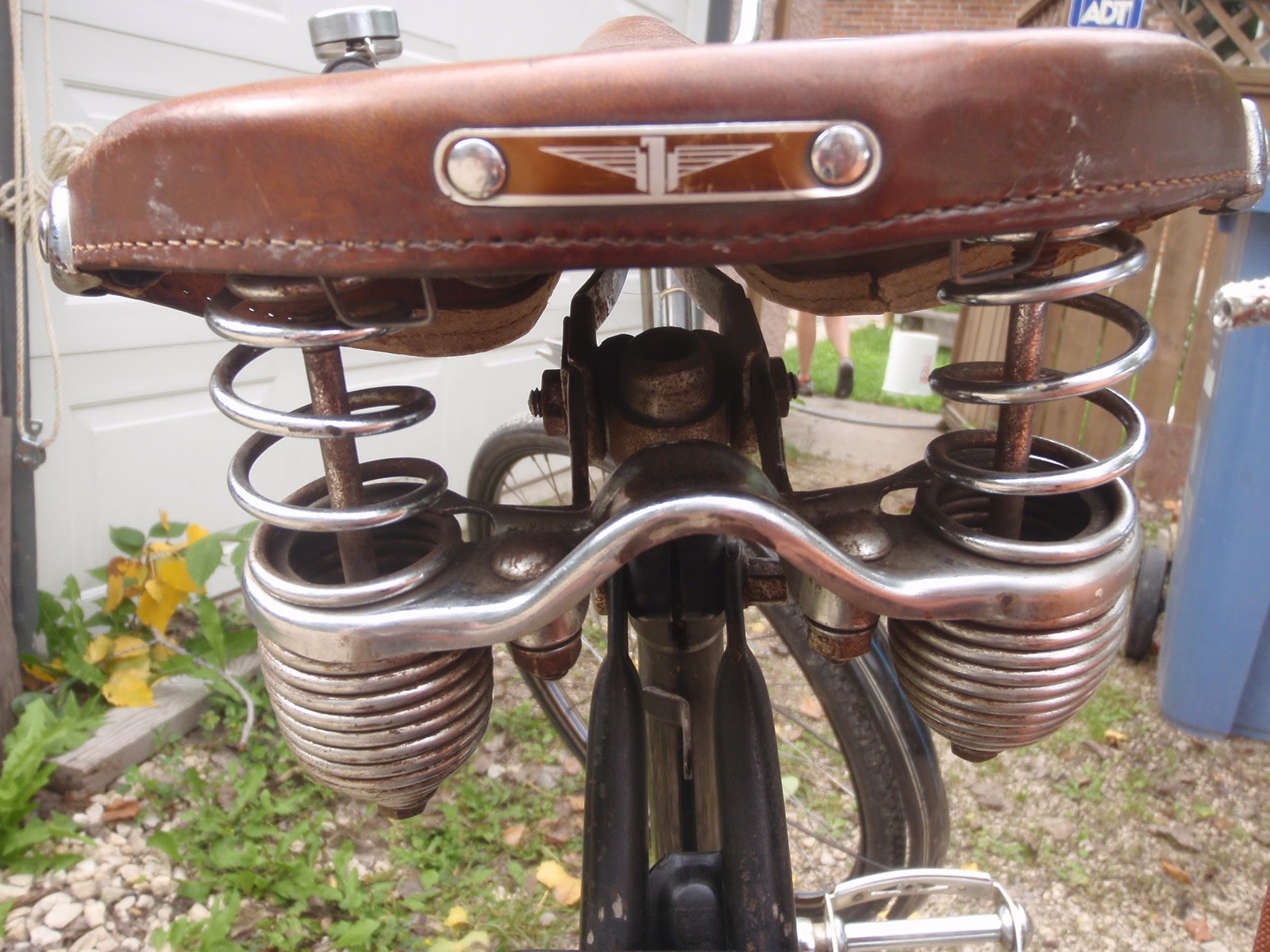 This afternoon The Geek and I went to a party at the dump. Not exactly a place most people choose to have a party, but WRENCH decided it was a good way to restock community bike shops. We were there as a part of SkullSpaces pre-August Hack-a-thon.
The City of Winnipeg has a compound at Brady Landfill where people are encouraged to drop of unwanted bicycles. The community bike shops benefit as well as The Winding River Therapeutic Community addictions treatment program in Headingley. The corrections officers at the center were  trained in bike building and repair and the treatment participants build bikes as part of their therapy.
At any rate, this is the scene when we arrived this morning; hundreds of bikes! 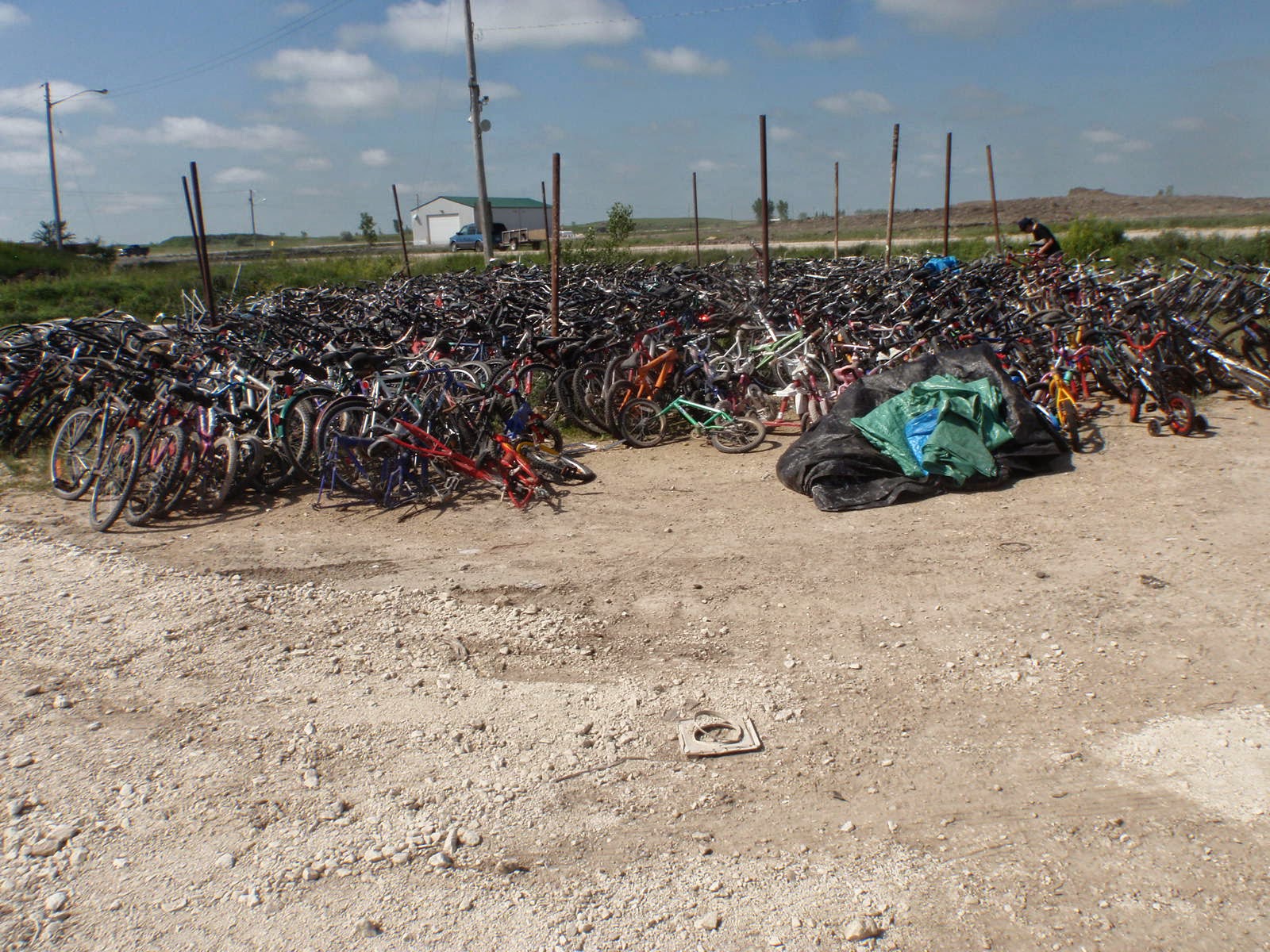 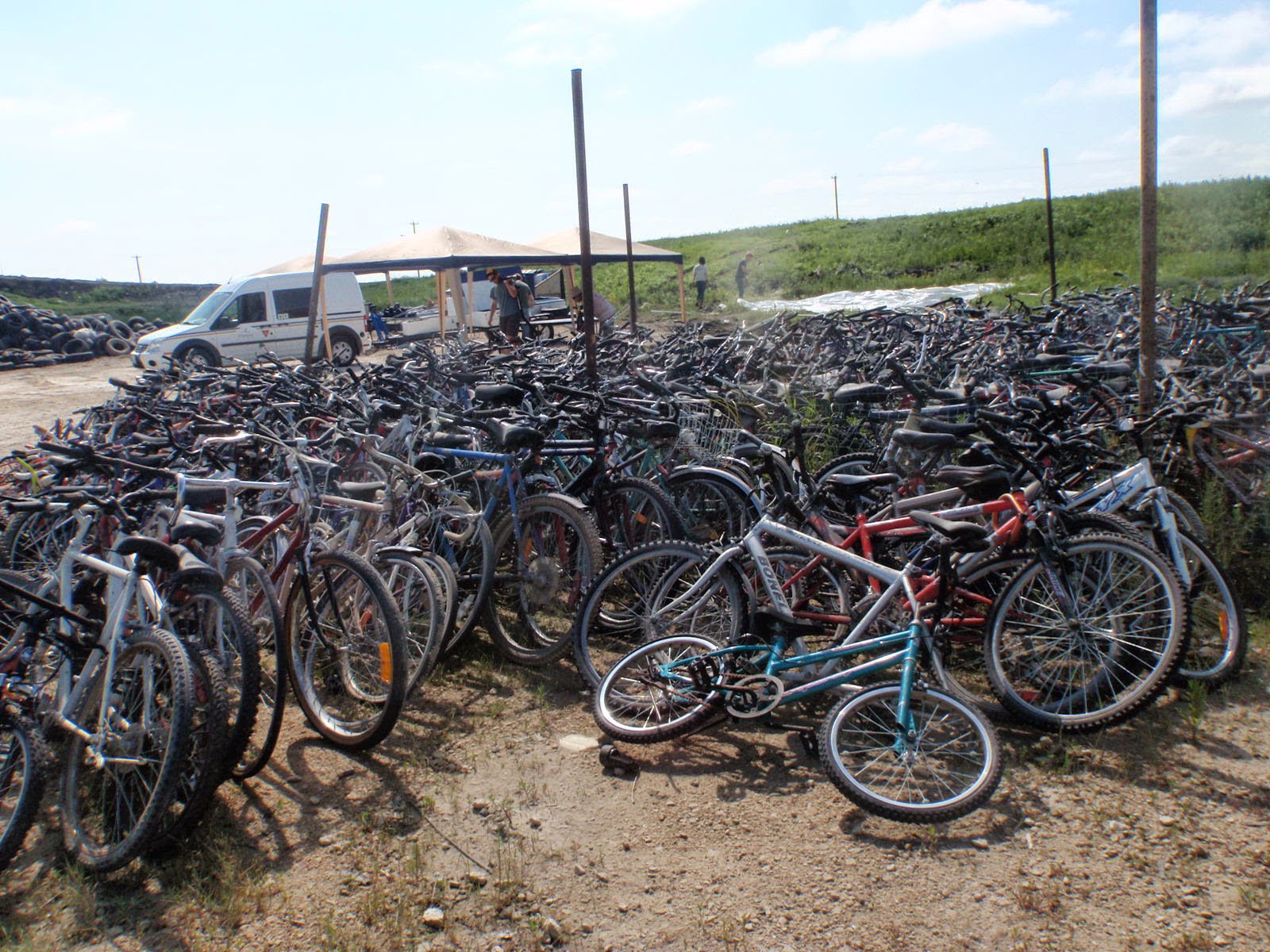 Bikes needing very little in terms of repair (and there were a great many of them) were taken as is. 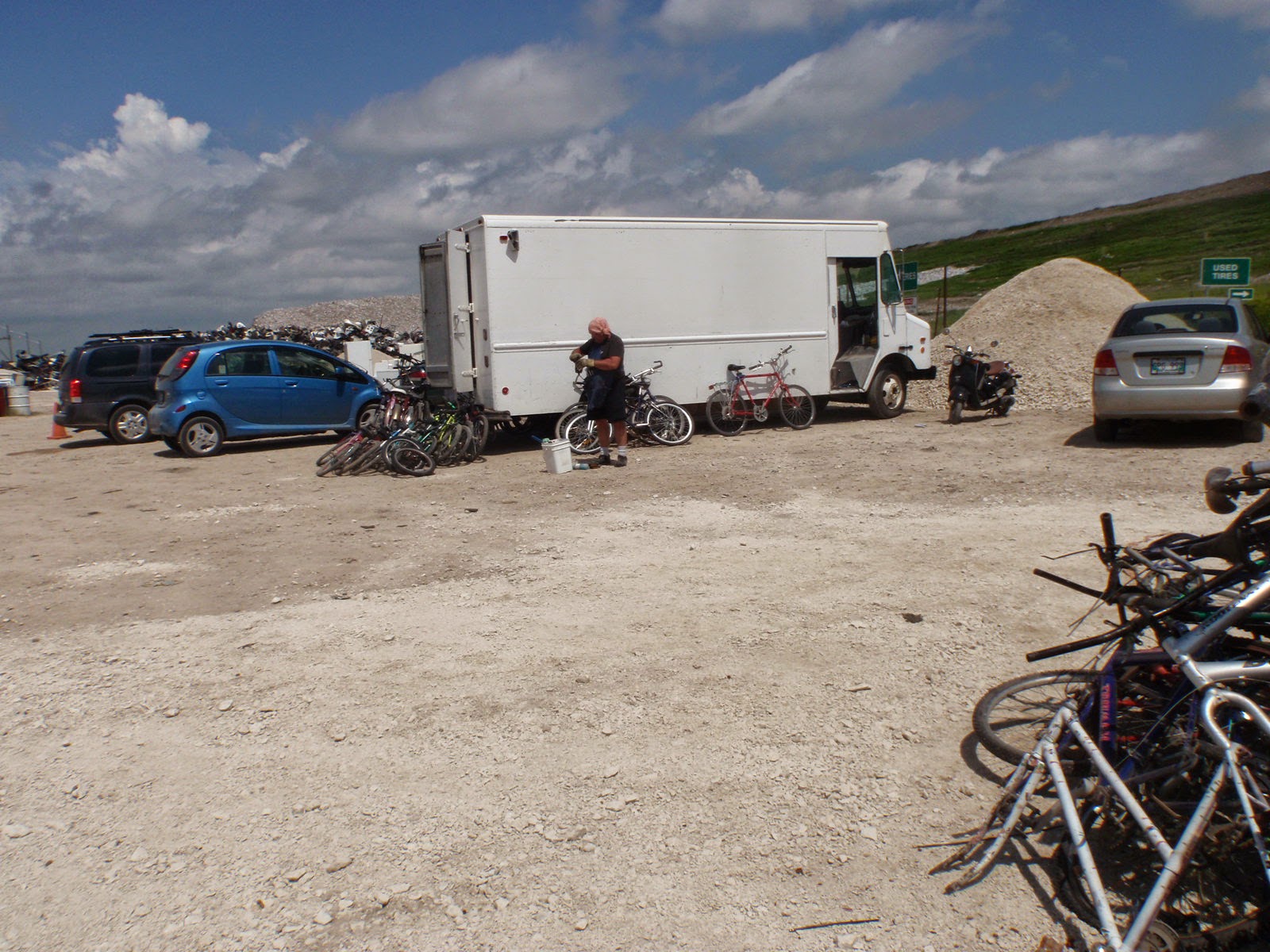 Today was one of the first hot days we've had this year -the shade provided by the tents was absolutely necessary. 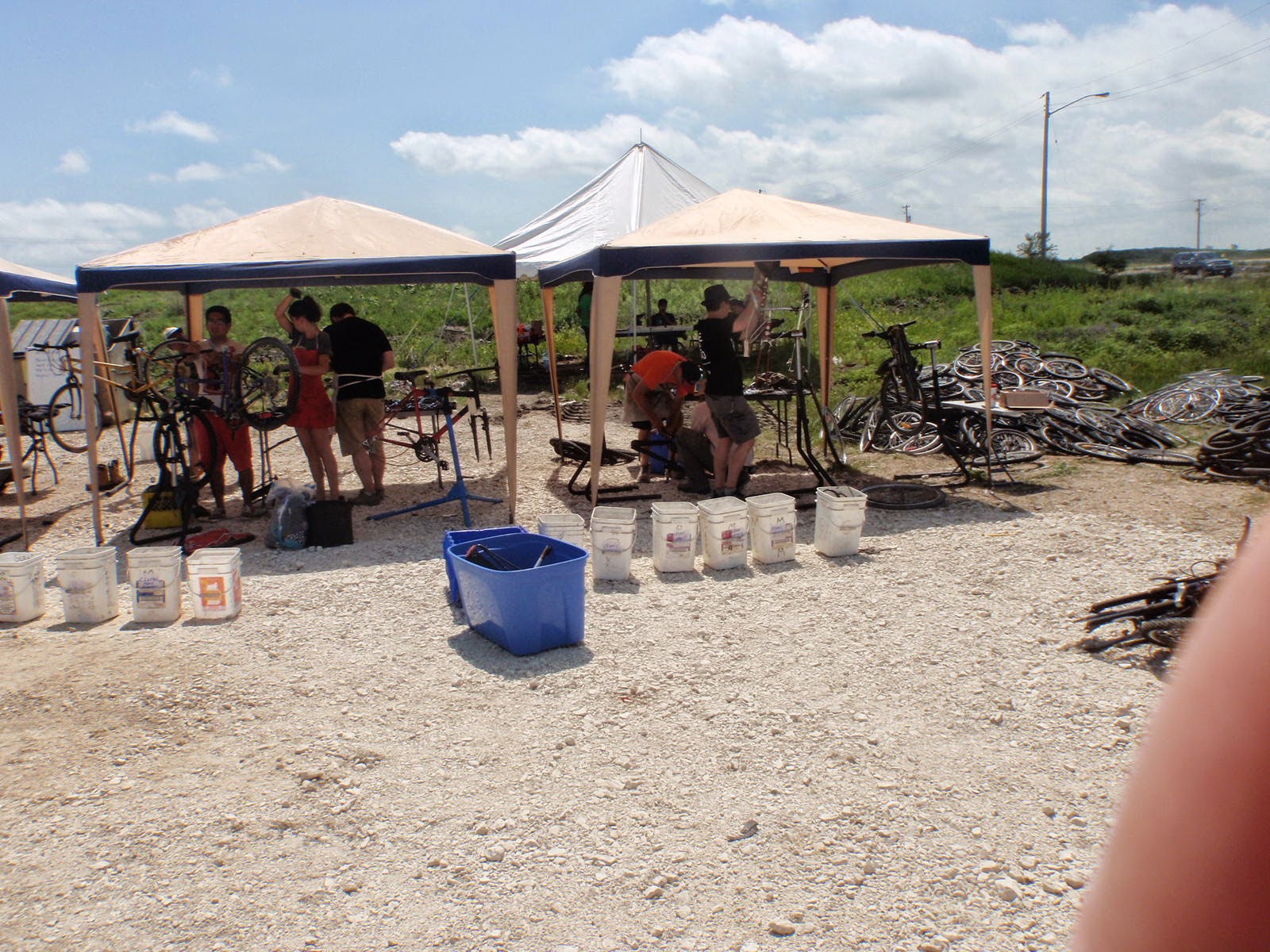 And the pile of frames stripped of usable parts waiting for the metal recyclers. 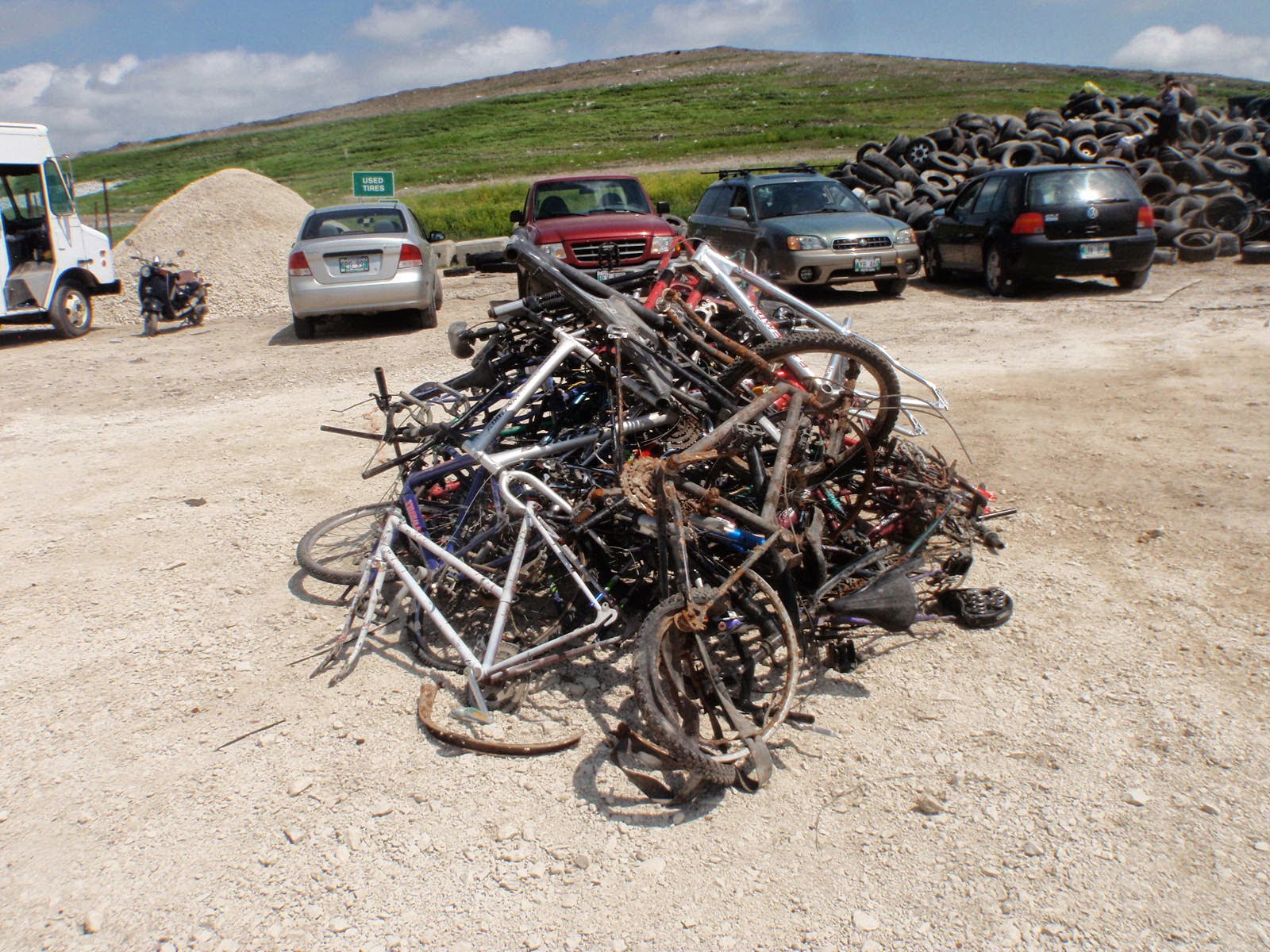 We also found, lost in the rows of bicycles, this elderly Raleigh. Most Winnipeggers seem to have little fondness for vintage bicycles, so we rescued it before it was stripped down for parts. It was likely in perfect condition when it was dropped off -even the tires held air when The Geek pumped them up. 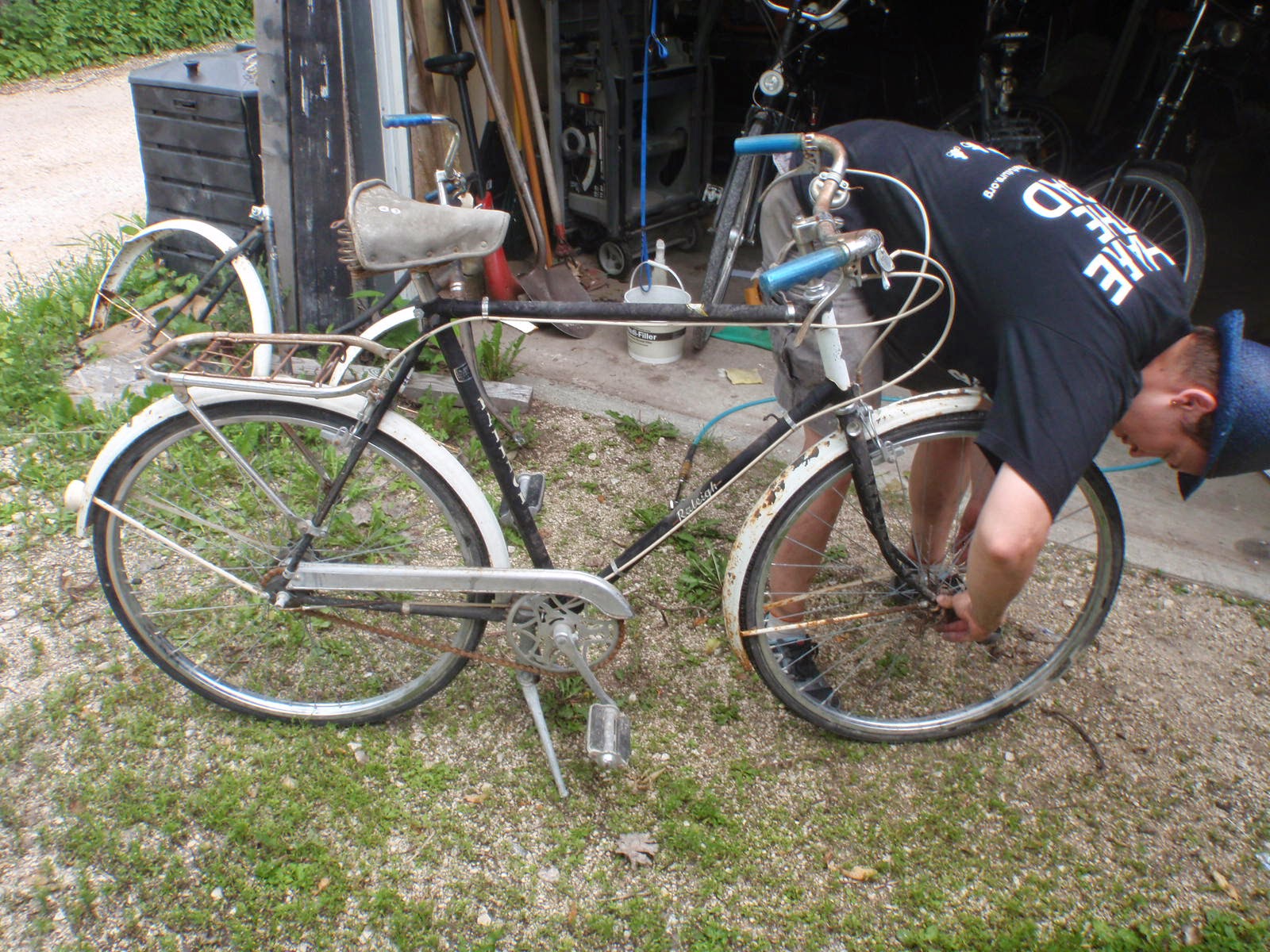 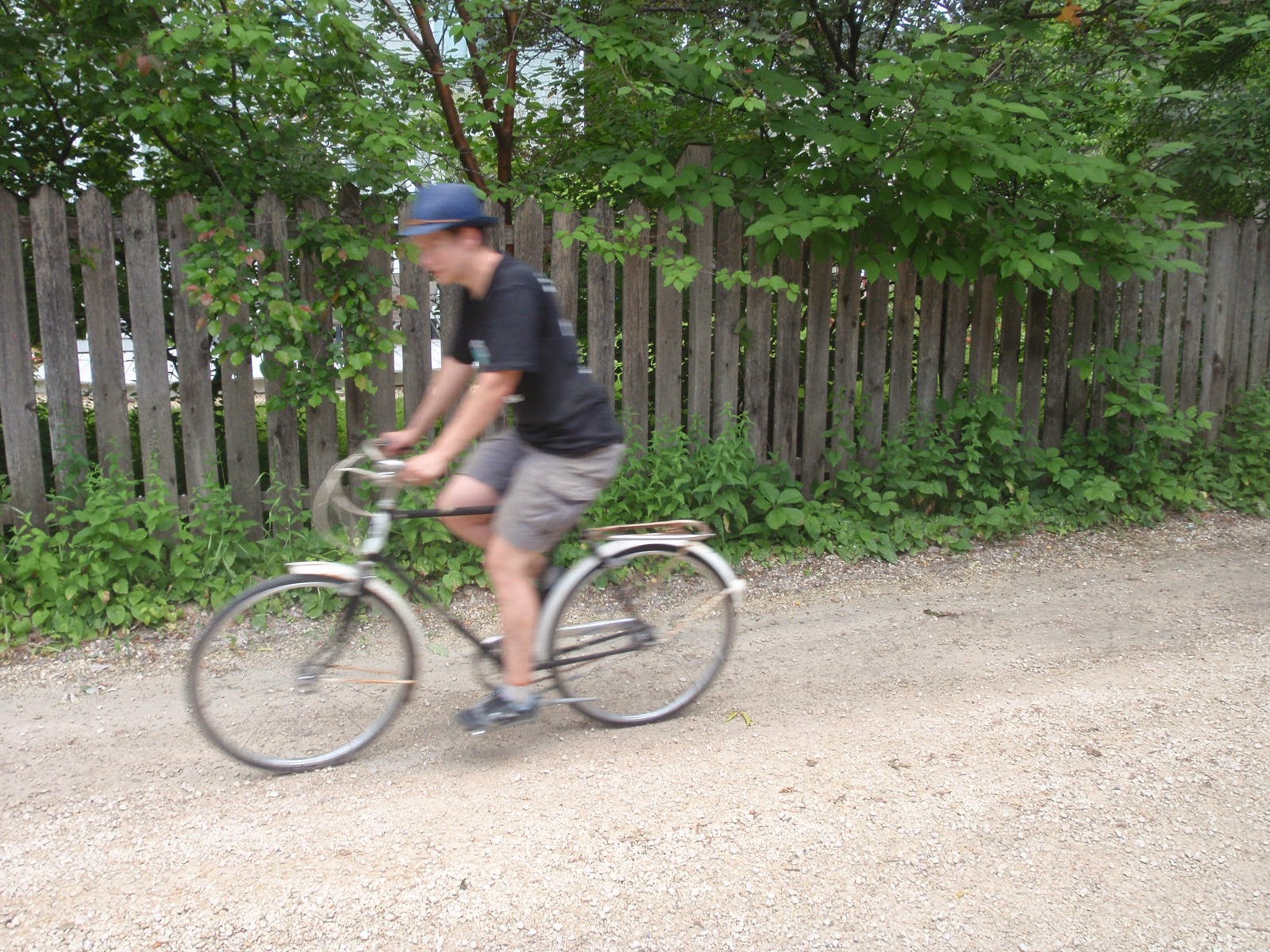 Another frame came home with us as well. 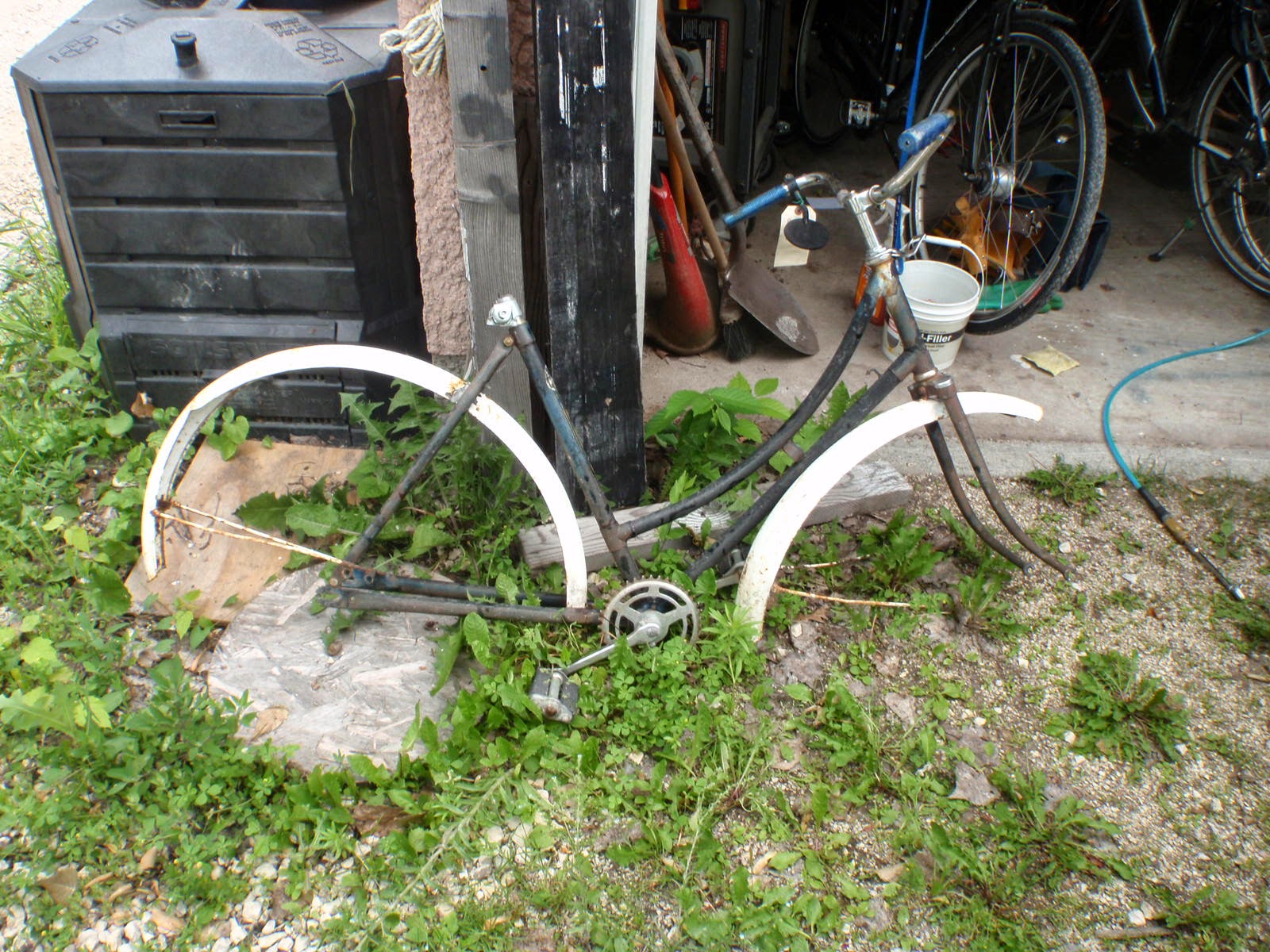 If you live in Winnipeg and you have some spare time, you may want to consider volunteering at one of these shops.
Posted by Sox at 20:44 No comments:

It has been a miserable, wet, windy day; we have yet to reach our forecast high of 17. I have only been out of the house briefly whereas on most Canada Days I am out all day enjoying the festivities somewhere.

I have a very cheerful song tho', co-written by Chris Hadfield, arguably one of our most famous Canadians, and his brother.

Enjoy what ever you are doing today; one of the benefits of living in this grand country.

Sox
I'm an observer and record-keeper of adventures and incidentals in the city of Winnipeg and beyond.

I tell myself there is no reason not to ride my bicylce more often to more places. I hope to use this site to motivate myself and others, and to applaude those people who already do.

The Rest of the World